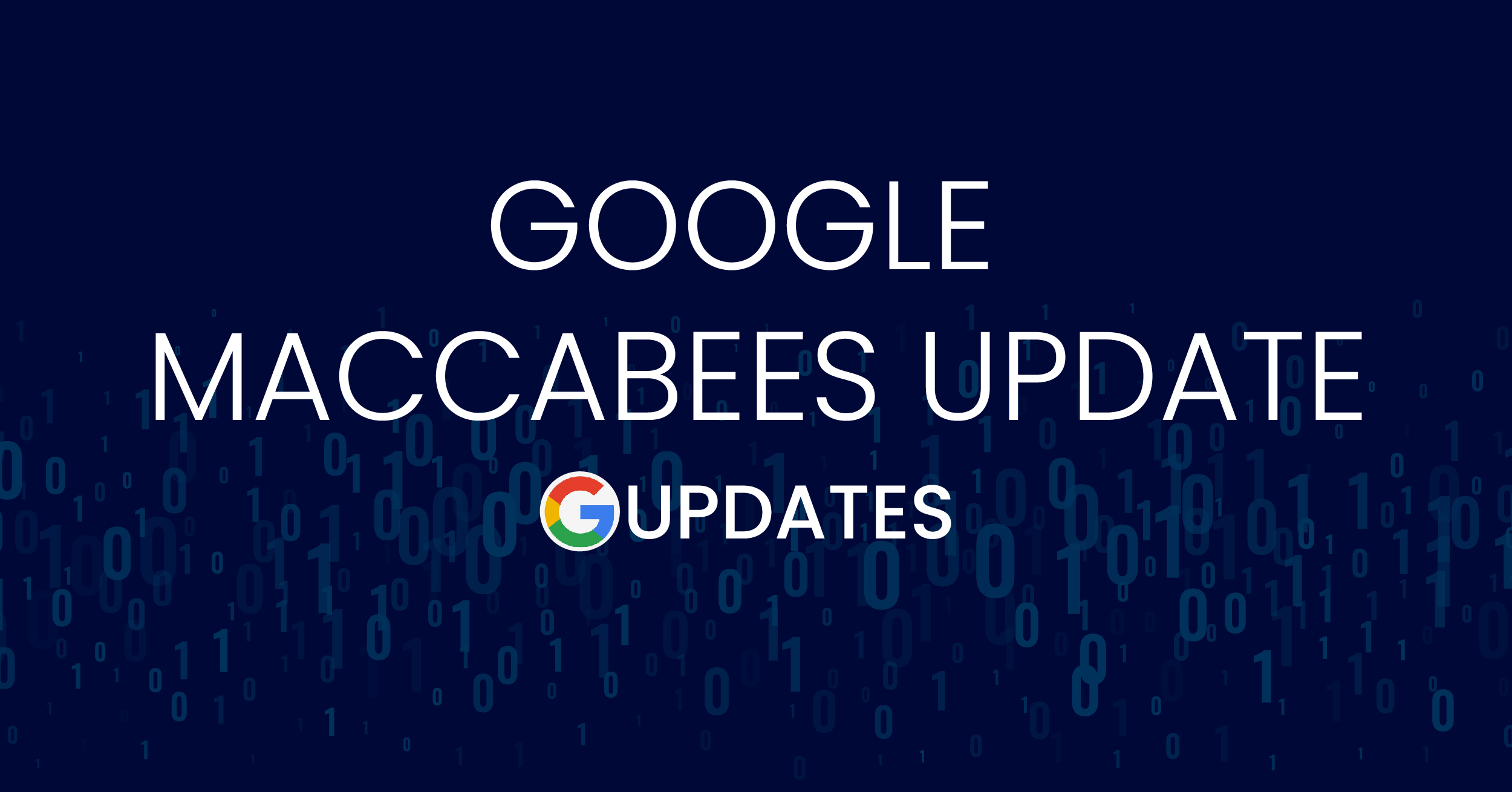 The Maccabees update was released in December 2017 as the latest update to Google’s core algorithm.

Actually, it was part of the Fred update, as Google announced in 2016 that every update they would release would be dubbed the Fred Update.

However, because it was Hanukkah, Barry Schwartz decided to call this update Maccabees. Please tell us more about this update right away.

Various reports are out there that Google had an “update” to search last week. This is our statement that says nothing about a *single* update:

“We released several minor improvements during this timeframe, part of our regular and routine efforts to improve relevancy.” …

What Does A Change In The Core Algorithm Imply?

The Maccabees update was part of a change in Google’s core algorithm. The term “core algorithm” implies a few things.

So, before we get into the Maccabees update, it’s important to understand what an update in the game is.

An update to the core algorithm can mean one of two things:

I. The algorithm that determines search engine ranking page results has been updated.

II. If there is a re-ranking of different sites on the search engine page, many websites that rely solely on a simple type of link may be jeopardized if that link loses any value.

III. It could also indicate that the algorithm that determines how page content is scored has changed.

All of this suggests that Google’s core algorithm has updated. Let us now look at what the Maccabees update is all about.

What Exactly Is The Google Maccabees Update?

The Maccabees update focuses on Google’s efforts to improve search relevance on its search engine page.

It essentially a continuation of the previously released Fred update. This update intended to improve the user experience. It continues to target and strengthen Google’s ideologies about quality content triumphing over all else.

The Maccabees update has primarily targeted affiliate sites. A few years ago, SEO experts discovered that long-tail keywords and answering questions go a long way toward improving a website’s rankings. As a result, they began to employ this strategy more frequently.

Simultaneously, black hat SEOs devised a method to exploit it. As a result, there were a lot of low-quality content pages with similar combinations of long-tail keywords that high-quality sites also used. This was interfering with the user experience.

Google’s Maccabees update had no effect on standard e-commerce sites in general, but some still reported significantly lower traffic since the update’s release.

What Did The Maccabees Update Modify?

We have already discussed the consequences of a change in Google’s core algorithm. The Maccabees update had very similar effects.

It altered how a web page judged for having relevant content based on search engine keyword queries.

It also demonstrates how the types of links used by a website affect page ranking.

Third, it altered how the types of content on websites contribute to their ranking.

Before Google confirmed that they had launched an update, the Maccabees update was a silent update in its core algorithms. However, Google never reveals what it is targeting with its new updates or what types of sites will affected.

Because there has been no official confirmation, several SEO experts have developed various theories and analyses about the latest update. Let us take a closer look at them.

1. Keyword Permutation And Combination In Excess:

The most widely held belief about the Maccabees update is that websites that used an excessive number of long-tail keyword permutations and combinations were the most affected. Travel websites among the hardest hit.

Using various permutations of similar keywords, travel websites attempt to create unique landing pages for each of their services or destinations.

This a result of the Google Fred update. The Fred update targeted websites with thin content and too many ads on a single page, which would degrade the user experience.

3. Websites That Were Built With The Help Of Scholarships.Edu Resources:

This is a different type of affiliate marketing that was not discussed after the Maccabees update released.

However, marketing expert Matt Diggity developed this theory about.edu links. When he conducted his research, he discovered that more than 40% of the websites affected by the Maccabees update had used.edu links.

This is all about websites that use backlinks from.edu websites to advertise scholarships. When a scholarship program launched, websites post about it with clickbait.edu links in order to find and target education partners and sponsors.

Normally, these sites appear to be promoting or offering scholarships for students, but it is their way of generating revenue by investing in authoritative links on the a.edu site.

It is common knowledge that in order to thrive in the web world, websites must have a responsive design. That is, the website should load equally quickly on mobile devices, desktop computers, and laptop computers.

Because people are increasingly accessing data from their mobile devices, websites must be mobile responsive if they are to remain competitive. It discovered that following the Maccabees update, many websites that not mobile-friendly lost traffic.

This is yet another extension of the Fred update. Following the investigation, it discovered that the majority of the websites affected the Maccabees update had one thing in common: content cannibalization.

This means that these websites had multiple articles or pages about the same keyword or topic, with minor variations here and there. As a result, these extra pages received no additional traffic, and the user experience suffered as a result.

Finally, with Google becoming less predictable by the day, SEO experts are now at a loss as to how to recover from an update. Google has been deafeningly quiet about the Maccabees update, in particular. As a result, the only way out is to keep an eye on your competitors.

The statistics, despite their claims, paints a quite different story. Even though the adjustments were minor, they had a significant impact on many websites.

People who rely on SEO’s magic juice soon began analyzing the time of flux between December 12 and 14, when the modifications rolled out.

Our final clue would come from Barry Schwartz, After conducting considerable research, he discovered that the websites that were de-ranked ranking on the SERPs page utilizing repetitious keyword permutations.

The main point of this change was that repetitive keywords do not provide for a good user experience. Travel websites, for example, frequently categorize locales by name, then location, and then repeat this process on subsequent pages by designating activities relevant to that page.